The Carlton Salon is a large cosy room with a door to the courtyard and a staircase to two bedrooms and a bathroom.

The kitchen is the heart of the house. The floor has the original ‘tomettes ancienne rouge’ tiles, there are huge oak beams and stone walls. There’s a large restored cupboard with a priest hole (now inaccessible to priests, due to new shelving). 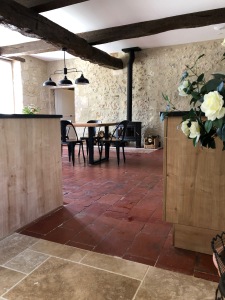 There’s a large gas and electric steel range cooker and granite work surfaces. There are no eye level kitchen units to ensure the beauty of the walls remains unobscured. The kitchen has a large wood burning stove, essential in the cooler months. The double door American style fridge freezer has filtered water and an ice maker, essential in the hotter months. 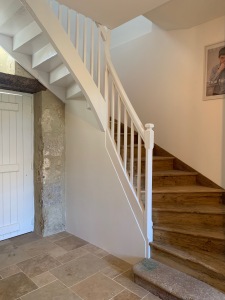 Not really a separate room to the kitchen but divided from it by a staircase and a peninsular unit. It also has a different flooring, with limestone ‘travertin’ tiles. The original floor was damaged when it was dug up to lay the waste water pipes. Some of the tiles were recovered to restore the kitchen floor which had been previously been patched up with concrete in a couple of places. 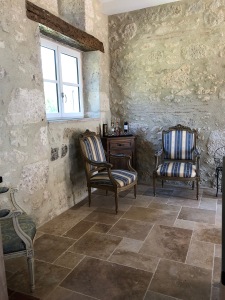 The different floor adds to the feeling that the hall is a distinct room. Opposite the front door there’s a corner cabinet bought fom the local charity shop and Louis XV style chairs bought from the monthly brocantes fair, at nearby Fourcès. It’s got an old masculine feel and as it’s where we keep our Armagnac, so it’s known as Cognac Corner (well Armagnac Corner doesn’t alliterate, does it?).

The WC is in a recovered wine store with a new doorway (off the Salon).  The floor also had to be built up with concrete to be level with the room it opens onto. The house is on a slope so different bits are a different levels.  It’s a big room for a loo and quite an odd shape with a small sink built into an alcove. It’s very white and brightly lit. I found the picture on the wall in a second hand shop in Condom. My mother had a much larger identical print hanging (I think in her kitchen) for many years.  I’ve just found out it’s called Young Girl Reading, by a French artist called Jean Honoré Fragonard (1732 – 1806).

Because we have three staircases and we wanted to make the bedrooms and bathrooms as large as possible the upstairs divides into three sections. bedroom one and bathroom one have their own staircase. The same applies to bedrooms two and three and bathroom two. It’s a slightly odd arrangement but it works and provides privacy for those that want it. 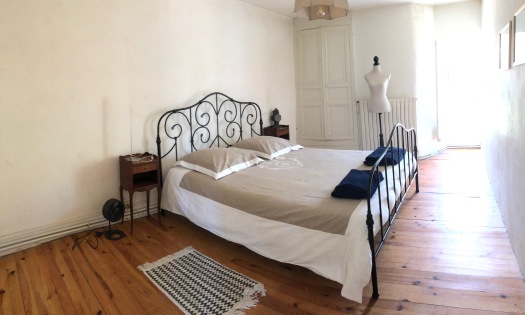 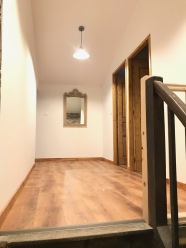